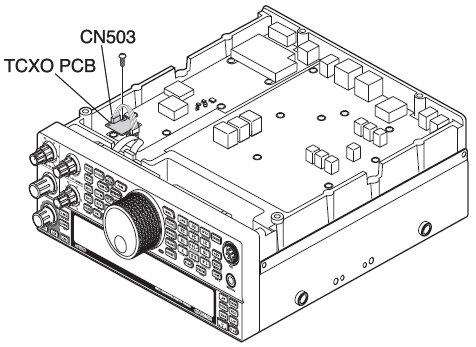 One of the first things that bothered me with my brand new TS590s was a noticeable fequency drift at startup. I was quite surprised to learn that the master clock of the TS590s uses a normal Xtal oscillator at 15.600 MHz.

Nowadays, in all serious rigs a TCXO is a MUST with the growth of digital modes. In mass production, it only costs a very few €uros. I'm convinced that the price of the TS590s wouldn't be higher (or even cheaper) if Kenwood would replace the original Xtal oscillator + the TCXO addon board + 2 jumpers + the 2 connectors + screws, etc...  with a TCXO !

But that's certainly a way for Kenwood to make an easy money by selling their optional SO-3 TCXO !

Moreover, the customer has to solder the TCXO on the addon board he has to remove from the transceiver. RIDICULOUS !!

I looked for another solution and found out that the 15.6000 MHz  frequency is not commonly available and standard. After a short quest, i also found on ebay a dealer in China that is offering a SO-3 compatible TCXO. Best of all, it's a small board that is a direct replacement for the Kenwood addon board. No soldering needed ! ( even if i'm not afraid by soldering some pins... )

The price is VERY fair and on a TS590s dedicaced mailing list, some where even doubting that it could work correctly. Even so, i ordered a board from this dealer and here are the results of my tests.

First of all, i wanted to be able to measure the frequency drift of the stock TS590s and later comparision with the TCXO fitted.

I have a Rubidium 10 MHz source that i could use as a reference and i thought it would be easy to fit the attenuated signal into the TS590s antenna input and measure the audio tone produced at a certain frequency.

To measure and analyze the AF frequency, i thought it would be a good idea to use a FFT software. I looked what software was available and found out that SPECTRUM LAB was a PERFECT candidate.

Spectrum Lab ( i'm discovering) can do a lot of things, and among these, it can record datas... Looking for some help, i found a paper written by VE2AZX named "Using Spectrum Laboratory (Spec Lab) for precise audio frequency measurements" . A perfect answer to my problem !

After a few tests, i adapted the settings to my needs and voilà ! All measures where made on receive at 10.001 MHz which should produce a 1000 Hz tone.

There is a rapid and continuous negative drift at startup and after a few hours, a slow positive one. I didn't continue measuring after 3 -4 hours to see how the frequency evolves...

To install the TCXO, i followed the instructions on pages 71-72 of the instruction manual, except that there is no need for soldering. The provided TCXO is on a small pcb that replaces the original addon board you can keep if you should want to return to the original configuration.The manual is a bit confusing regarding the 2 jumpers C903 and C904. You must remove them completely or attach them to only one pin, which has the same result.

On the board i got, the spacing between the 2 holes was a bit small (less than 1mm) compared to the original board, and i had to force the screw a bit. One could file the holes a bit for a perfect patch. I've send a note to the seller for future board production.

As you can see, there is a small, very slow, drift at startup and a much better frequency precision ! A huge improvement for a small price !

Update December 2021
In one of his article, Mark W7MLG writes that after his measurements, there is a significant phase noise increase with the mentioned TCXO that is deteriorating the good performances of a stock TS590 :
https://sites.google.com/site/markstcxomeasurements/
You can probably be concerned if you run contests and live in a radio crowed area.