Having already built a prototype of the fabulous K3NG keyer, I decided to use this project by adapting it to my needs.

For the power supply, I chose a pair of AAA type batteries which therefore provide 3V, are quite small and on sale everywhere which is handy for a project that must be used on the go and may require an unplanned change of batteries.
The heart of the assembly is an Arduino Mini because I had several in stock and it is easily modifiable to reduce consumption. It does not have items such as an USB port which are not useful in my project and would consume power unnecessarily. The Arduino is supplied with 3 V directly via the VCC pin.

To limit consumption, the software's SLEEP function is used, which switches the keyer to standby after a certain period of non-use. The current used is then very low, which originally made me consider not using an on / off switch, but I added one to avoid accidental button presses during transport. In operation, the manip consumes about 3.3 mA and in standby less than 1 uA!

To limit the size and weight, it was chosen not to install a speed adjustment potentiometer. The speed is modified using the paddles.

In order to facilitate the construction, I chose to use a printed circuit board with all the components including connectors, pushbuttons, switch, battery support and LEDs. The components are welded on both sides, the battery box on the underside and the + LED keys on the top.
Integration is done in a small TEKO 2 / A-1 box with dimensions of 72x57x28 mm.

In order to minimize the consumption of the Arduino Mini, it is necessary to unsolder everything that is useless, namely the voltage regulator and the power-on LED as shown below. 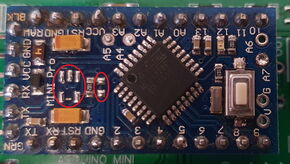 To program the Arduino, it is necessary to solder the 5 pins on the left in the image below, but UNDER the PCB in order to reduce the height of the assembly.

The Arduino can be soldered directly to the printed circuit with the disadvantage of then being difficult to unsolder. It is better to put it on a support.
I used female pins sold in 40 pin length and cut to 12. To gain height, the male pins will be soldered onto the Arduino without the plastic part. I first welded the bar with the plastic to make it easier to weld and then removed this plastic. 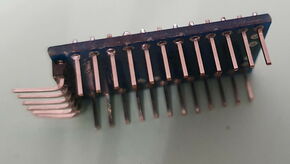 Solder all SMD components on the component side starting with resistors, capacitors, transistors, connectors, battery holder + Arduino and buzzer. The ON / OFF switch can be soldered on the top or bottom of the PCB according to your wish.

Then solder the pushbuttons and the LED on the underside of the PCB.
The layout allows the use of 2 types of keys, a model of the more expensive D6 series which allows the integration of the control LED in the key and another very inexpensive CMS model with a separate LED. 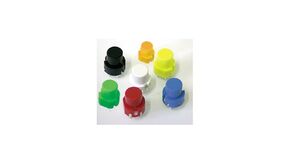 I bought small cabochons that fit on the keys, but you can do without if you choose keys with a sufficiently long button.

The circuit will then be integrated into the TEKO 2 / A.1 box for which the PCB has been made. 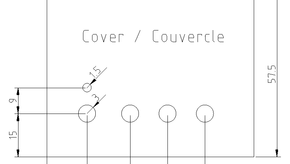 The PCB is self-supported by the 2 jacks and some foamglued on the bottom of the case.

For those who would be interested, I have some printed boards that I can give away with the on / off switch and the 4 pushbuttons.

In order to "fit" in an Arduino Mini, the software is calibrated with a limited number of functions. Exit all that is useless ...
Below are the parameters to modify in the configuration files.

To facilitate the loading of the software, I provided below versions compiled in .HEX format.
To load this file into the Arduino, you can use various methods, including the XLOADER software.

The keyer goes into automatic standby after 30s (configurable). In order to avoid accidental waking up by pressing a memory button during transport and forgetting to switch off the remote, only pressing a paddle brings the remote from standby. This function can be modified by changing the code. (see the customization chapter)

To program the memories, change the parameters (speed, type of manipulation, etc.), switch to COMMAND mode by pressing the CMD key. The COMMAND mode is confirmed by a double tone from the buzzer and the lighting of the LED.
Commands are passed to the software by manipulating letters following the information below.
To exit command mode, press the CMD key again or send the letter X, the command is confirmed by a double tone inverted compared to that of the COMMAND entry.

A total RESET of the memories content and all parameters can be done in pushcing both paddles and switching the keyer ON. Stay pushed about 5 seconds. A RESET does produce a special double tone.

SLEEP mode delay
By default, the software only allows you to set the time before going to sleep in minutes.
The following modifications in the sketch allow this to be done in seconds:
In file keyer_settings.h
#define go_to_sleep_inactivity_time 30 // délai en secondes