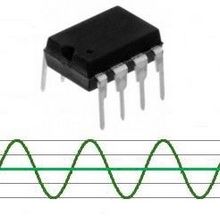 Here is a description of an audio frequency tone decoder build around a PIC 12F683.

For a cost not much higher than a basic NE567, you will have :

In one of my projects, i wanted to use 2 LED bargraphs.
The classical way to do that is to use a IC made for that, the LM3914. This circuit has been build to drive 10 LEDs which are generaly in a single module.
10 LEDs wasn't quite enough for my usage, i wanted more diodes for more "precision". I also wanted to mix diode colours, what is not easy to do with diode modules.

The LM3914 can be chained to drive more LEDs, but price is getting higher...

My first thought was to use 20 LEDs, the first one being green, than orange and finaly red to display an overdrive or a danger.

The picture shows the first pcb made and only a few LEDs wired for testing !